Annette Messager (1943) is a French artist who creates installation using photographs, prints, drawings, textiles, and found objects; exploring themes such as memory, childhood, loss and nostalgia. Other motifs include issues of sexual or mental abuse, disguise and distortion, the fragmentation of the body, and fairy tales. All of her work is creating using traditionally feminine materials and methods, evoking the domesticity, repression, but also power of womanhood.

Collecting as a form of Self Identification

When naming and titling her work, Messager often gives herself labels of recognition. In her early years, Messager carried a dual personality – for works created at home in her bedroom collecting together photographs, objects, and information, she was “Annette Messager, Collector”. And for the works made in her studio, she was “Annette Messager, Artist”. Other monikers Messager has used over the years include “the trickster”, “the handy-woman”, “the peddler”, and “the liar”. Of these titles, Messager says that “They are titles of nobility that I have earned. They protect me from the time that passes by, from the outside, from you. It is like a collection of titles. Collecting is a form of protection, a way of fighting against death.”

Messager was only able to shirk her multiple personalities with the installation “Dependence / Independence” (opposite) that required a combination of roles. Dependence / Independence is a chaotic installation of familiar objects – a realm of “assorted photographs, stuffed / taxidermied animals, hand-sewn cloth letters, colored pencils, plastic bags, and netting” that viewers are supposed to “enter” and “get lost” in. As Messager says of the piece, it “brought together all these different identities and gave me new strength… a new freedom to bring together these ‘Annette Messagers’ and then to divide them again, deform them, disembowel them, cut them up, and piece them together again with great joy!” This demonstrates how Messager uses art as a therapeutic form of self identification – first in labeling herself with arbitrary titles, and then in liberation as she shirks them for a more inclusive sense of self. The Aesthetics of Collection

Although Messager’s artistic oeuvre is highly experimental and contains a variety of different styles and aesthetics, one consistent theme in her work is that of collection and combination. Her work is an amalgamation of different objects, an arrangement of mementos, photographs, and artifacts. From the series of photographs juxtaposed with text in “My Works” (1988), to the collection of “crucified” and destroyed stuff toys in “Remains II (Family II)” (2000), and the giant installation of suspended memorabilia in “Dependence / Independence” (1996), it is clear that none of Messager’s work are singular pieces. Rather, they are large artworks created by a combination of small objects. This creates a huge visual impact upon first glance due to its large collective scale, yet simultaneously invites the viewer in for a closer look at the individual artifacts, creating a “dual-impact” as the viewer can revisit and examine her pieces over and over again.

I personally see the “collective” aesthetic of Messager’s work to be a rather feminine trait, that reflects her themes of nostalgia, domesticity, and memory. Collecting or hoarding objects is often seen to be a feminine habit, as stereotypically women are much more attached to material objects and nostalgic mementos than men are.

Along with Messager’s frequent use of childish and girlish objects (stuff toys), explicitly feminine imagery (photographs of the fragmented female body), and traditionally feminine methods of creating (knitting, crafting), the collection of such objects challenges the viewer to view a world of familiarity and safety through the discomforting eyes of a woman and a child. 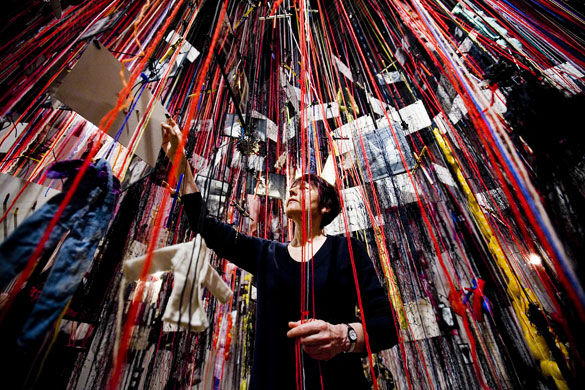