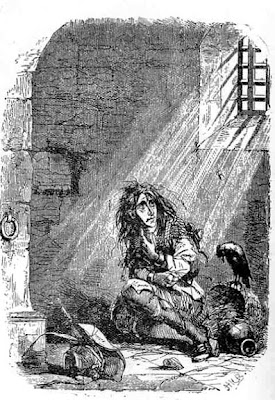 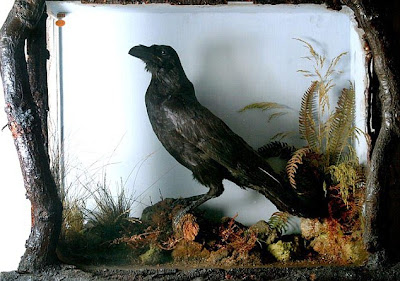 I’ve never read Barnaby Rudge by Charles Dickens (1812-1870), which is about a simple young man whose life is put in jeopardy when he gets caught up in the mayhem of the Gordon riots and the mystery of an unsolved murder. In the novel, the title character is devoted to his talkative raven, Grip, and The Mirror suggests that the plot can be condensed into a tweet as follows:

But the bird in the fictionalized book was quite real – and important to literary history. Grip was the 1st of a series of 3 pet ravens belonging to the Dickens family (see illustration here).
The bird died in 1841 – possibly from eating lead chips that had been scraped off a wall that was being repainted – and prompted the inconsolable author to describe Grip’s final hours to his friends:

“On the clock striking twelve he appeared slightly agitated, but he soon recovered, walked twice or thrice along the coach house, stopped to bark, staggered, exclaimed “Halloa old girl! (his favorite expression) and died. The children seem rather glad of it. He bit their ankles but that was play. He behaved throughout with a decent fortitude, equanimity, and self-possession, which cannot be too much admired.”
The living animal and its literary counterpart had much in common in addition to talking and popping
champagne corks, as Dickens described in print:
“Grip was by no means an idle or unprofitable member of the humble household. Partly by dint of Barnaby’s tuition, and partly by pursuing a species of self instruction common to his tribe, and exerting his powers of observation to the utmost, he had acquired a degree of sagacity which rendered him famous for miles round. His conversational powers and surprising performances were the universal theme: and as many persons came to see the wonderful raven, and none left his exertions unrewarded – when he condescended to exhibit, which was not always, for genius is capricious – his earnings formed an important item in the common stock. Indeed the bird himself appeared to know his value well; for though he was perfectly free and unrestrained in the presence of Barnaby and his mother, he maintained in public an amazing gravity, and never stooped to any other gratuitous performances than biting the ankles of vagabond boys (an exercise in which he much delighted) killing a fowl or two occasionally, and swallowing the dinners of various neighbouring dogs, of whom the boldest held him in great awe and dread.“
Those words were read by Edgar Allan Poe (1809-49), who was working as a literary critic at the time. Poe reviewed the serialized version of Barnaby Rudge for Graham’s Magazine upon its publication in 1841. Shortly thereafter, Grip took on another identity: the bird in Poe’s most famous poem (hear it read by Christopher Walken here). “That’s because Grip is ‘The Raven,’ ” says Edward G. Pettit, author of the forthcoming Edgar Allan Poe in Philadelphia. The poem, published in 1845, reads in part:

“But the Raven still beguiling my sad fancy into smiling,
Straight I wheeled a cushioned seat in front of bird, and bust and door;
Then, upon the velvet sinking, I betook myself to linking
Fancy unto fancy, thinking what this ominous bird of yore —
What this grim, ungainly, ghastly, gaunt, and ominous bird of yore
Meant in croaking ‘Nevermore.’“
It is the bird’s connection to Poe* that brings me to the point of this post: Grip is still with us (emphasis on still). When he died, Dickens had him mounted. When Dickens died, Grip was sold at auction and eventually made its way into the Poe collection of Col. Richard A. Gimbel (1898-1970) of Philadelphia. After Gimbel’s death, his collection – including the only known copy of “The Raven” in Poe’s hand, manuscripts of Annabel Lee and Murders in the Rue Morgue, and first editions of all of Poe’s works – was donated to Philadelphia’s Free Library. The historic bird (2nd image) is the centerpiece of an exhibit celebrating the 200th anniversary of Dickens’ birth. He’ll be on display weekdays for the next year if you want to have a look!

*My own connection to Poe is in the form of a Halloween costume (photo in slideshow below) and the travels of the taxidermied bird I sent to my friend George the following Christmas (read about it here).

1st image) Barnaby Rudge in Newgate Prison as depicted in J.A. Hammerton’s The Dickens Picture-Book (London: Educational Book Co., 1904) by Halbot K. Browne, who illustrated the works of Charles Dickens under the pseudonym “Phiz.” Image scanned by Philip V. Allingham (other illustrations of Rudge here). 2nd image) “Grip,” the preserved pet raven that belonged to the Dickens family, now on display in the rare-book section of the Free Library of Philadelphia. The photograph appears in the Daily Mail (another photo with Dickens’ great-great-grandson here).