From Wild Men in the Middle Ages by Richard Bernheimer (Harvard University Press: Cambridge, 1952): “The late 15th century also added the combination of the wild man and his wife holding the same armorial shield, a motive which … seems to have been derived from older representations of wild-man families and their happy life in the woods. This motive was especially popular as a printer’s mark, and was used as such by some of the chief Parisian printers of the late 15th century, such as Philippe Pigouchet and Jean Poitevin, whose prominence induced other printers in Paris, Caen, Lyons and Cologne to adopt it in their own turn. As employed by this group of tradesmen, the mark shows a coat or arms hanging from a fruit-bearing tree, while a wild man and a wild woman with wreaths in their hair are engaged in guarding the heraldic device suspended between them.” 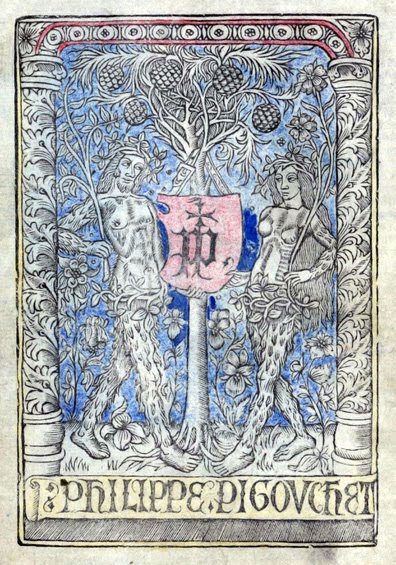 “It is interesting to note that this international trademark seems to have come to the attention of Albrecht Dürer, who used the combination of a wild man and woman with an armorial shield in one of his designs for a book owned by his friend Willibald Pirckheimer.” 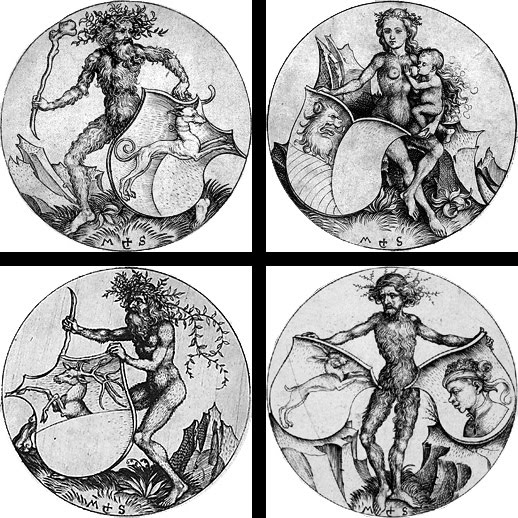 “By the second half of the 15th century the representations of the wild folk as shield supporters had become common coinage to such an extent that artists, bored by the excessive familiarity of the theme, began to experiment with deviations from it. It occurred to German engravers that they might try to meet an increasing demand for prototypes of heraldic designs by representing the wild man or woman with an empty shield, or one containing a merely decorative design, making it possible for other artists to avail themselves of these models by merely placing the proper emblems into the reserved space. There are engravings of this kind from the hand of the Master E.S. and Martin Schongauer; even Dürer fell back upon the precedent established by his forerunners when he inscribed into the otherwise empty escutcheon of his Coat of Arms of Death the purely allegorical device of a human skull.” 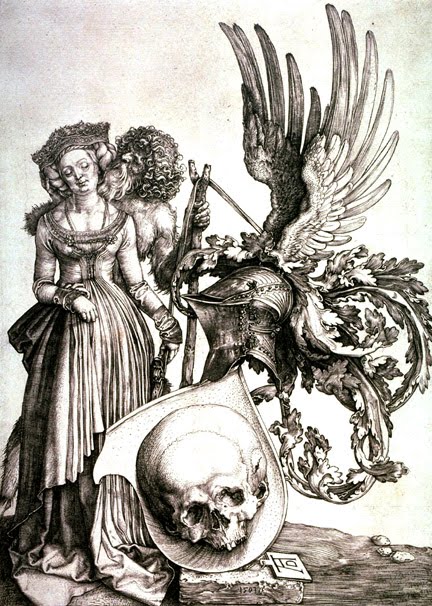