Last week, a huge story broke: art historians had discovered 100 previously unknown drawings by Michelangelo Merisi, aka Caravaggio, from his student days in Milan. Since there are only 90 surviving paintings by the master of chiaroscuro, this collection would more than double the Caravaggio catalog and would be worth hundreds of millions of dollars.

Art historians Maurizio Bernardelli Curuz and Adriana Conconi Fedrigolli spent two years going through 1,378 paintings and drawings from the workshop of Simone Peterzano, a late mannerist who had been a student of Titian’s in Venice and was Caravaggio’s teacher in Milan from 1584 to 1588. The collection is kept in Milan’s Castello Sforzesco, not on public display but open to scholars.

By comparing the drawings from the Peterzano collection to later works by Caravaggio, Curuz and Fedrigolli claim to have developed “a rigorous survey methodology for identifying underlying geometric patterns from the artist’s early Roman period” which allowed them to pick out his student work from the workshop group. The final tally was 100 drawings, 10 oil paintings and a letter to Peterzano that “highlights the friction and misunderstandings between two temperaments at odds” written in a “swift and violent style” that a handwriting expert claims is likely in Caravaggio’s hand.

Instead of submitting their groundbreaking conclusions to scholarly peer review, however, the researchers decided to publish their findings in two e-books translated into four languages, available for sale on Amazon.com and via links on their own website (netiquette warning: there’s an autoplay video on the homepage) for $17.36 a pop. The exceptional announcement coupled with e-book sales did not go over well in the art historical community, to put it mildly.

Tomaso Montanari, a professor of Baroque art at the University of Naples, said: “They didn’t pass through a scientific peer review, and that gives them little credibility. The Web site that claims that this is a great discovery reminds me of TV sales promotions. From the scholarly point of view, it really has no value.”

Even the city of Milan, which owns the Castello Sforzesco and the Peterzano collection within, was reluctant to jump on board the Caravaggio train. A city council spokesperson noted that those drawings have been browsed by plenty of experts before and nobody has ever attributed any of them to Caravaggio. City council member Stefano Boeri sounded similar notes of caution, insisting that the new attributions be carefully examined by a panel of experts before anyone sounds the “100 new Caravaggios found!” publicity trumpet. He is also launching an investigation into “the correctness of the procedures regarding the publication” of the e-books.

Curuz’s response to the question of why they went straight to e-books instead of seeking out scholarly review is the classic insider conspiracy trope, so often seen in medical and scientific quackery.

Mr. Bernardelli Curuz, who is the artistic director of the Fondazione Brescia Musei, which manages monuments and organizes art exhibitions in the northern city of Brescia, said that they had opted to make their discovery known through an e-book because academic research in Italy was in the hands of an established, tight-knit group that tried to thwart younger scholars. The book was published in four languages “because we wanted to reach the most scholars possible,” he said, denying any underlying commercial interests.

Protip: if you want to reach the most scholars possible instead of looking like you’re just out to make a buck, make your research available for less than $34.72, maybe even for free.

This is not to say that they’re entirely wrong about the attribution. Several of the drawings do bear some resemblance to Caravaggio’s later work, but most of them are really rough sketches, body parts and the like. Even the portraits that when reoriented and resized look like they fit into one of his oil paintings are pretty raw work when you look at the drawings on their own terms in decent resolution. For example, here’s one of the composites in the e-book: 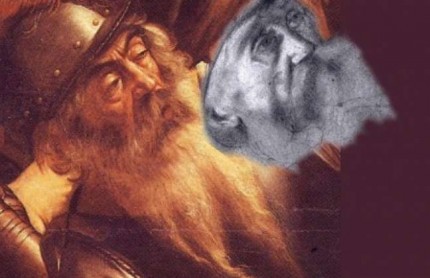 That’s a detail from Caravaggio’s The Conversion of Saul with an inset of one of the drawings from the Peterzano collection. Here are the complete painting and the drawing side by side: 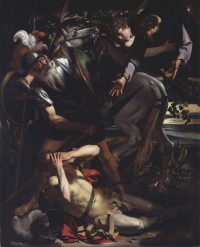 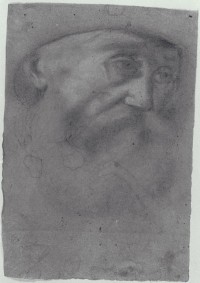 The resemblance is unimpressive seen in full, isn’t it? The drawing is fairly rudimentary and although it may be a function of the scan, it looks to me like the composite made generous use of the contrast tool in Photoshop to give it more of that chiaroscuro depth that is so characteristic of Caravaggio’s famous work.

The fact is, attribution is a tricky thing and if style matching is your only evidence, then you don’t have much evidence at all. They’ve gone about this in a highly shady way and their claims have been far more definite than is prudent, or even decent, really. On Tuesday Amazon removed the e-books from their offerings — they won’t say why — but they are still available on self-publishing site Lulu (Young Caravaggio – One hundred rediscovered works – Volume I, Volume II).

The city of Milan has made all of the drawings in question available for download in six zip files on their website free of charge, naturally. The drawings and catalog information will be consolidated in a website that will go live July 12th so bookmark http://graficheincomune.comune.milano.it/ now and check it tomorrow.

(Via The History Blog)