Art, being bartender, is never drunk;
And magic that believes itself must die. 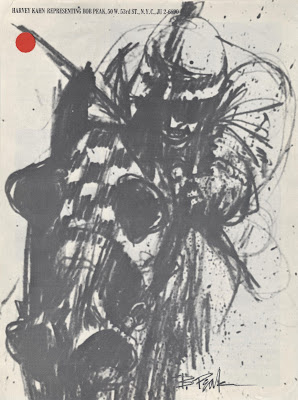 …except it turns out that Peak made several careful studies to achieve that spontaneous look. He re-copied drafts on tracing paper, preserving the elements he liked. 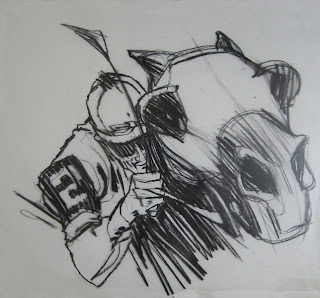 He even drew faint pencil guidelines so he would know the best way to make his bold, slashing strokes appear free and unconstrained: 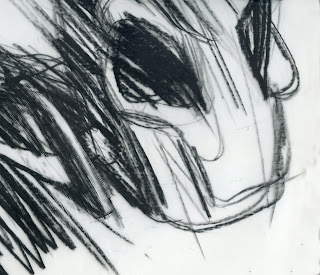 Peak employed old conjurer’s tricks to create the magic in art. (Viereck described art as “a hoax redeemed by awe.”) It might have been personally more cathartic for Peak if he reacted to the thrill of the race by making wild, unrehearsed scribbles but it would have made for lousy art.

David Seymour took this photograph of a young Polish girl who, after being freed from a Nazi concentration camp, was asked to draw a picture of her home. 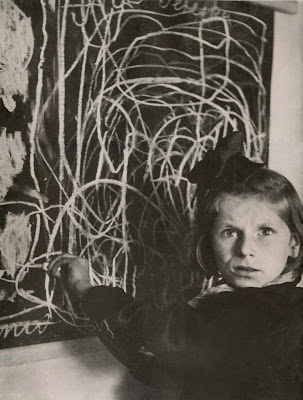 The anguish in her face is unmistakeable. Her picture amounts to nothing more than a frantic jumble. 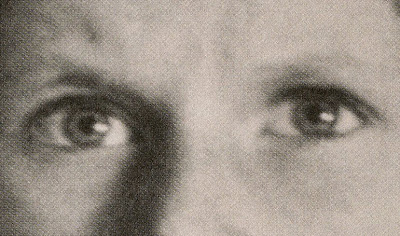 Long ago, Nietzsche wrote of the “self-conquest” necessary to make “torrential passion…become still in beauty.” Shakespeare, who also knew a thing or two about passion, lauded those with the power to move others while remaining in control of their own faces:

[Those] who, moving others, are themselves as stone,
Unmoved, cold, and to temptation slow:
They rightly do inherit heaven’s graces
And husband nature’s riches from expense,
They are the lords and owners of their faces,
Others but stewards of their excellence.

When art gets too close to the passion and emotion that inspire it, it tends to melt. In order to move others with art’s magic, it seems that at least part of the artist must remain unmoved as stone– separated from the primacy of experience by proportion, archetype and even skill.

It is fashionable in some circles to value pictures that appear raw, unschooled and spontaneous (going far beyond the ancient principle that art should appear as effortless as possible in order to prevent technique from becoming a distraction). I like such pictures but I think their “spontaneity” is a romantic delusion for the benefit of the conjurer’s audience. The artists I like best tend to be the ones who struggle self-consciously for this effect, just as Peak did. The performers who believe their own magic (of which there are many these days) seem consistently less successful.