Some archaeologists believe that the oldest existing illustration of a fictional work on paper is this drawing of Hercules fighting a lion: 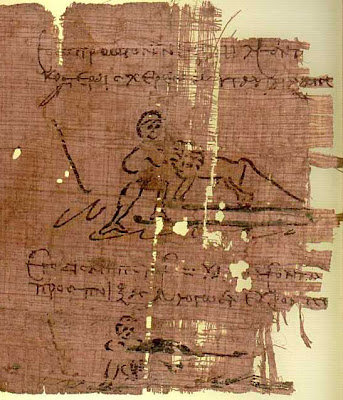 Known as the Heracles Papyrus, it was discovered under the desert sands outside the ancient Egyptian city of Oxyrhynchus (named for a fish which, according to legend, ate the penis of the god Osiris).

The city was once the bustling regional capital of the 19th Upper Egyptian Nome. For a thousand years, residents dumped their garbage– including this noble little illustration of Hercules– in the sands outside the city. With the fall of the Egyptian empire, the city was conquered by successive foreign invaders (from Alexander the Great in 332 BCE to the Arabs in 641). Reduced to ruins, Oxyrhyncus was abandoned and gradually reclaimed by the desert.

But it turns out that the climate was perfectly suited for preserving the scraps of paper in the rubbish heaps outside Oxyrhyncus. The site had virtually no rain, a low water table, and was far from the Nile river (which flooded annually). The dry sand blew over the tattered bits of papyrus, covering and preserving them until they could be rediscovered by archaeologists. This was the ancient equivalent of mylar.

But it is all in vain. Hercules will always triumph over the dumpster.

Parents hope their children will read something with enduring value, not cheap stories of musclebound heroes drawn on equally cheap paper. But it’s a funny thing about endurance; even the most perishable materials can become darn near immortal when they carry a message that is renewed by each new generation. The Heracles of the papyrus seems to have outlasted the stone capitals of the mightiest empire on earth.