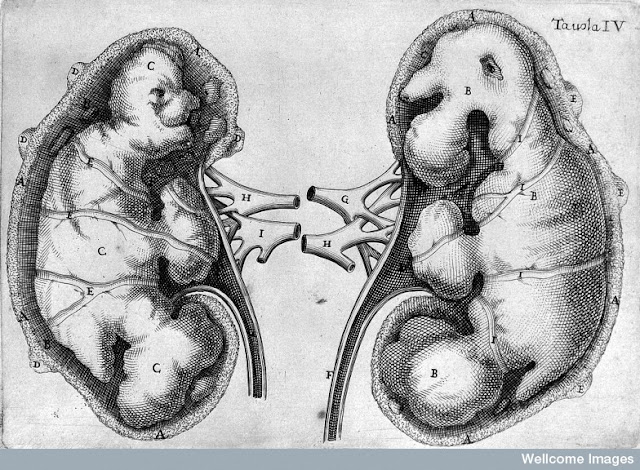 Tommaso Alghisi, 1669 – 1713
Pope Innocent XI’s kidneys containing massive stones
From: Litotomia
1707
Wellcome Library, London
The Wellcome Foundation in London is a fascinating institution in the heart of London
It aims to improve human and animal health
Amongst other methods to do this it explores medicine in historical and cultural contexts
The above picture throws new light on a virtually unknown side of the Papacy
Blessed Pope Innocent XI (1611 – 1689) was a martyr to the “stone” – that terrible and extremely painful affliction.
The picture above makes it clear that the poor man must have been in agony. He died from the stone.

This was in addition to all his other troubles with France, Louis XIV, and his putting down of Quietism
He was one of the most remarkable and vigorous Pontiffs in a very turbulent age. His liberation of the Church from Gallicanism led to a revival of his reputation in the late 19th century through the efforts of the Dominican Joachim Joseph Berthier
A copy of the revised life of Innocent XI is available here: Vita di papa Innocenzo XI (1889)
Alghisi was Professor of surgery at the Hospital of St. Maria Nuova in Florence. He acquired great prowess in the surgical treatment of bladder and kidney stones (“the stone”)
He had many famous patients including Pope Clement XI
His most famous work was Lithotomy (Extraction of the stone) which was a work dedicated to the Pope, Clement XI 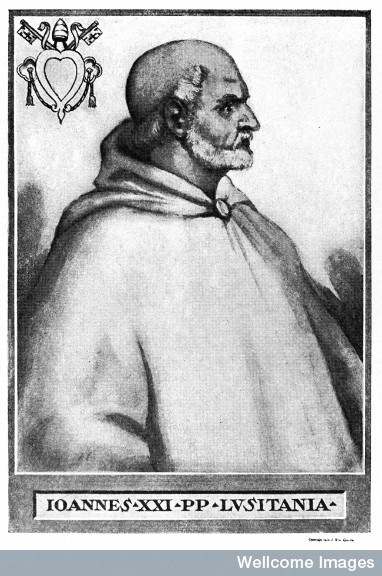 Petrus Juliani or Petrus Hispanus (Pope John XXI (XX)) (c . 1210 – 1277) was a medical man who pursued his medical studies even while Pope 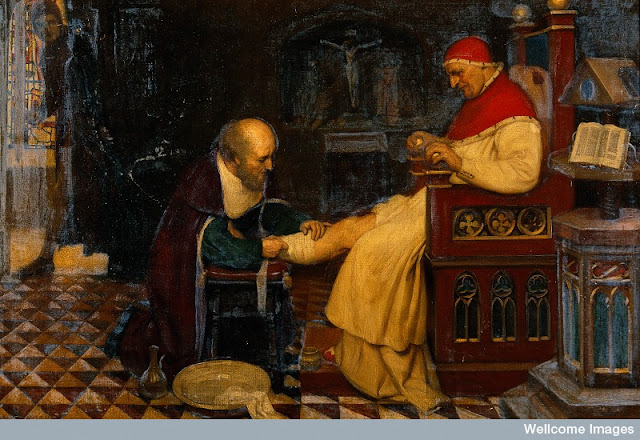 Ernest Board 1877–1934
Guy de Chauliac bandaging the leg of Pope Clement VI at Avignon, while Petrarch, his enemy, jealous of his influence, watches him, ca. 1348.
Oil on canvas 61.4 x 91.5 cm.
Wellcome Library, London
This painting is one of over 26 paintings by the historical painter Ernest Board that were commissioned by Henry S. Wellcome in around 1912 of episodes relating to the history of medicine and science.
Others can be viewed here
Pope Clement VI (1291 – 6 December 1352), was Pope during the Black Death (1348–1350 He himself did not catch it
One of his physicians was Guy de Chauliac or Guigonis de Caulhaco (ca. 1300 – 25 July 1368) the author of Chirurgia Magna.
This treatise on surgery was translated into many other languages and was the standard text for centuries in Europe
He was also physician to Pope Innocent VI (1352–1362), and then to Pope Urban V (1362–1370).
He was the greatest surgeon of the Middle Ages and is called “The Father of Surgery” (at least by the French)
It is likely that Guy was a priest or other cleric
One of the main recommendations of Guy was for plasters and bandages for the treatment of wounds as can be seen from the painting.
Unfortunately he also thought that pus was good for the treatment of wounds and the wounds were bound up along with the pus
Petrarch and Guy were at the Court of Avignon at the same time. It would appear that they were enemies.
It would appear that amongst his ministrations for Clement Guy performed a trepanation on the Pope
One of the scenes depicted by Board for Wellcome involves that great doctor of the Church Albertus Magnus or St Albert the Great (1193/1206 – November 15, 1280) 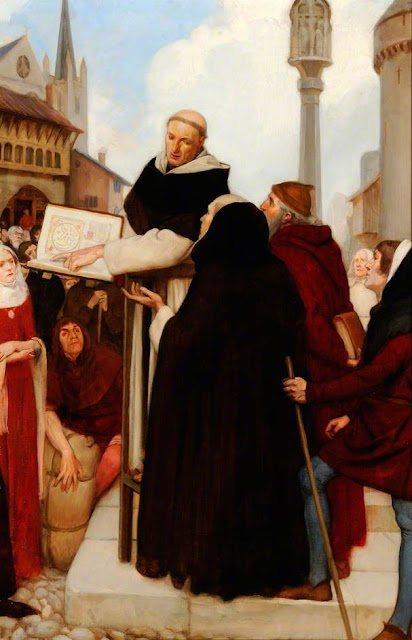 Ernest Board 1877–1934
Albertus Magnus Expounding His Doctrines of Physical Science in the Streets of Paris, c.1245 .
Oil on canvas 92.4 x 62 cm
Wellcome Library, London
Albert has been described as the greatest German philosopher and theologian of the Middle Ages.
He is the patron saint of natural scientists
Pope Benedict XVI devoted one of his catechesis on the life of St Albert
He said of him:

“He still has a lot to teach us.

Above all, St Albert shows that there is no opposition between faith and science, despite certain episodes of misunderstanding that have been recorded in history.

A man of faith and prayer, as was St Albert the Great, can serenely foster the study of the natural sciences and progress in knowledge of the micro- and macrocosm, discovering the laws proper to the subject, since all this contributes to fostering thirst for and love of God.

The Bible speaks to us of creation as of the first language through which God who is supreme intelligence, who is the Logos reveals to us something of himself.

The Book of Wisdom, for example, says that the phenomena of nature, endowed with greatness and beauty, is like the works of an artist through which, by analogy, we may know the Author of creation (cf. Wis 13: 5).

With a classical similitude in the Middle Ages and in the Renaissance one can compare the natural world to a book written by God that we read according to the different approaches of the sciences (cf. Address to the participants in the Plenary Meeting of the Pontifical Academy of Sciences, 31 October 2008; L’Osservatore Romano English edition, 5 November 2008, p. 6).

How many scientists, in fact, in the wake of St Albert the Great, have carried on their research inspired by wonder at and gratitude for a world which, to their eyes as scholars and believers, appeared and appears as the good work of a wise and loving Creator!

Scientific study is then transformed into a hymn of praise. …

St Albert the Great reminds us that there is friendship between science and faith and that through their vocation to the study of nature, scientists can take an authentic and fascinating path of holiness.

His extraordinary openmindedness is also revealed in a cultural feat which he carried out successfully, that is, the acceptance and appreciation of Aristotle’s thought.

In St Albert’s time, in fact, knowledge was spreading of numerous works by this great Greek philosopher, who lived a quarter of a century before Christ, especially in the sphere of ethics and metaphysics.

They showed the power of reason, explained lucidly and clearly the meaning and structure of reality, its intelligibility and the value and purpose of human actions.

St Albert the Great opened the door to the complete acceptance in medieval philosophy and theology of Aristotle’s philosophy, which was subsequently given a definitive form by St Thomas.

This reception of a pagan pre-Christian philosophy, let us say, was an authentic cultural revolution in that epoch.

Yet many Christian thinkers feared Aristotle’s philosophy, a non-Christian philosophy, especially because, presented by his Arab commentators, it had been interpreted in such a way, at least in certain points, as to appear completely irreconcilable with the Christian faith.

Hence a dilemma arose: are faith and reason in conflict with each other or not?

This is one of the great merits of St Albert: with scientific rigour he studied Aristotle’s works, convinced that all that is truly rational is compatible with the faith revealed in the Sacred Scriptures.

In other words, St Albert the Great thus contributed to the formation of an autonomous philosophy, distinct from theology and united with it only by the unity of the truth.

So it was that in the 13th century a clear distinction came into being between these two branches of knowledge, philosophy and theology, which, in conversing with each other, cooperate harmoniously in the discovery of the authentic vocation of man, thirsting for truth and happiness: and it is above all theology, that St Albert defined as “emotional knowledge”, which points out to human beings their vocation to eternal joy, a joy that flows from full adherence to the truth.”