Incoming male students at the École des Beaux-Arts in Paris a century ago were forced to endure some amazing hazing rituals. One involved stripping naked and dueling with loaded paint brushes. 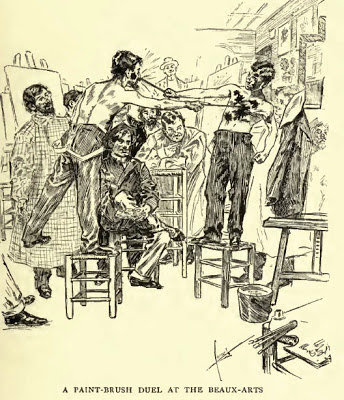 “The Hungarian and one of the French nouveaux were next seized and stripped. Then they were ordered to fight a duel, in this fashion: they were made to mount two stools about four feet apart. The Hungarian was handed a long paint-brush dripping with Prussian blue, and the Frenchman a similar brush soaked with crimson lake. Then the battle began. Each hesitated to splash the other at first, but as they warmed to their work under the shouting of the committee they went in with a will.

“When the Frenchman had received a broad splash on the mouth in return for a chest decoration of his adversary, his blood rose, and then the serious work began. Both quickly lost their temper. When they were unwillingly made to desist the product of their labors was startling, though not beautiful. Then they were rubbed down vigorously with turpentine and soiled towels, and were given a franc each for a bath, because they had behaved so handsomely.

“Bishop was made miserable during the ensuing week. He would find himself roasting over paper fires kindled under his stool. Paint was smeared upon his easel to stain his hands. His painting was altered and entirely re-designed in his absence. Strong-smelling cheeses were placed in the lining of his “plug” hat. His stool-legs were so loosened that when he sat down he struck the floor with a crash. His painting-blouse was richly decorated inside and out with shocking coats of arms that would not wash out. One day he discovered that he had been painting for a whole hour with currant jelly from a tube that he thought contained laquer.”

From Bohemian Paris of Today