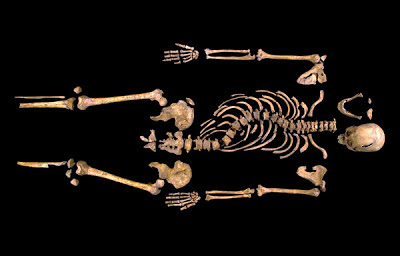 According to the Guardian, the bones found underneath a parking lot in Leicester, UK, do indeed belong to Richard III, England’s last Plantagenet king, who was killed in 1485 in the battle of Bosworth. The clues included DNA tests, the variety of injuries, and the distinctive deformed spine.

Richard III was the subject of a Shakespeare play, a famous scene of which was painted by Edwin Austin Abbey (1852-1911).

The painting is in the collection of the Yale Art Gallery, which says the painting “shows the villainous, humpbacked Richard proposing to Lady Anne, Henry VI’s widowed daughter-in-law, as she walks in the late king’s funeral procession. Swathed in a sheer black veil and wearing a gown stiff with heraldic embroidery, she is accompanied by Richard’s two young nephews and black-cloaked, halberd-bearing honor guards, their halberds reversed as a sign of mourning.” 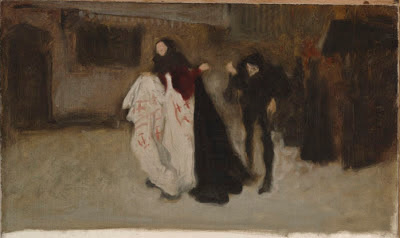 Abbey’s preliminary studies show how the composition took shape. This early oil study concentrates on the protagonists, with Lady Anne leaning away from Richard’s dastardly gesture as he offers the ring.

Another oil sketch resolves the finery of their costumes, and the dark processional figures begin to emerge from the background. 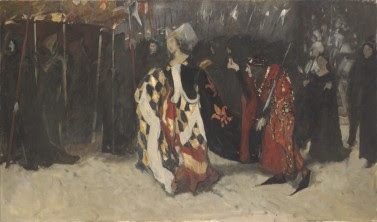 Here’s a later sketch, which Abbey would have done from his imagination, while doing studies of models taking the poses in recreated costumes. 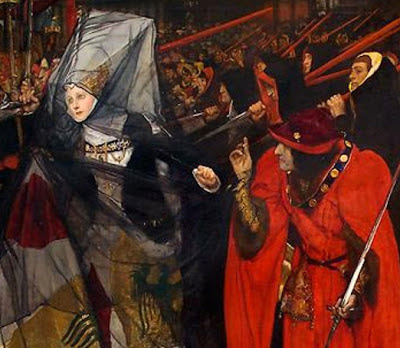 Yale describes the scene further: “Shortly before the moment depicted, Anne has heaped curses on Richard for having brutally stabbed to death both her father-in-law and her husband, Edward, Prince of Wales. Undaunted, the fawning Richard praises her extravagantly, asserting that he killed them in order to get near her, and offers to let her kill him, or to kill himself with the unsheathed sword that he holds up. But instead of plunging it into his breast, as she asks, he offers her a wedding ring. She will later succumb to his flattery and declarations of remorse, and accept his proposal.”
Abbey shows her after her earlier rage has transformed to numbness and vulnerability.
The painting was the sensation of the 1896 Royal Academy exhibition. Punch dubbed it “The picture of the year.” The Art Journal said it was “one of the artistic surprises of the century.”
Yale Art Gallery: “Richard Duke of Gloucester and the Lady Anne”
E. A. Abbey on WikipediaGuardian article and video
The only books on Abbey are:
Edwin Austin Abbey by E.V. Lucas