In a previous post we learned that artists scan the world differently than non-artists do. 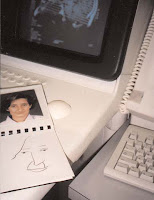 What about the neural activity inside the brain during the act of drawing? What structures in the brain come into play? Is the activity in those structures different for experienced artists compared to non-artists?
Neuroscientist Robert Solso, who headed the Cognition Lab at the University of Nevada-Reno, asked an experienced portrait painter named Humphrey Ocean (British, born 1951) to draw a picture of a face while his brain was being monitored by an fMRI (functional magnetic resonance imagery) scanner. As a control, he had a graduate student with no particular experience at drawing do a similar task.
The scans are below. These are horizontal cross sections with the front of the brain at the top.

The four scans in the top row show the activity in the brain of the experienced artist while drawing; the lower scans are of the inexperienced person drawing. At far left, both scans show activity in the fusiform face area (FFA). This region in the rear right area of the brain specializes in face recognition.
It appears that the inexperienced artist is “stuck” in this region. The artist’s brain shifts activity to the right frontal area, a part of the brain that is active when we are consciously analyzing visual problems and enlisting more complex strategies.

Here’s how Solso explains it:

“It appears that a novice artist requires greater cerebral “effort,” as indicated by increased regional cerebral brain ﬂow in the FFA than does an experienced portrait painter, who spends hours each day over years looking at and analyzing faces. Perhaps Ocean is so well practiced at facial perception that he is less likely than a novice to ponder the features and gestalt of a face. Furthermore, if Ocean’s brain is especially efﬁcient at processing faces, he may be able to allocate more cerebral effort to deeper aspects of a person’s face. My preliminary results did indicate that Ocean showed greater activation in the right frontal area (see upper right two scans) than did the novice painter, which suggests that the expert painter used “higher order” cognitive processing. In effect, he could be “thinking” a face, as well as ‘seeing’ it.”

Studies that look into art and cognition are just in their infancy, and there’s much more to learn. Solso says: “Art and cognition have always stood as two convex mirrors each reflecting and amplifying the other. Yet surprisingly, in spite of monumental recent developments in both aesthetics and cognition, the connection between the two disciplines has not been studied systematically.”
—–
Read more at “About Faces: In Art and In the Brain” by Robert Solso
Fusiform Face Area on Wikipedia
Book: Vision and Art (Updated and Expanded Edition)

by Margaret Livingstone
Previously on GJ:
Do Artists See Differently?