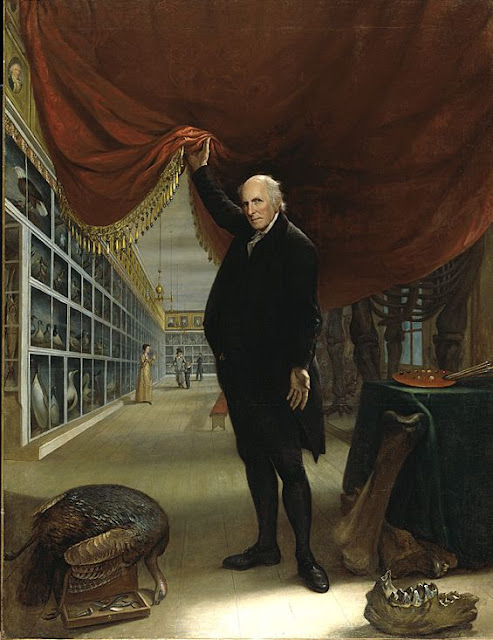 Charles Willson Peale (1741 – 1827)
The Artist in His Museum
1822
Oil on canvas
103¾ x 79 7/8 in. (263.5 x 202.9 cm)
The Pennsylvania Academy of the Fine Arts
Charles Willson Peale (April 15, 1741 – February 22, 1827) was an extraordinaryAmerican: painter, soldier and naturalist. A Renaissance man
His portrait paintings of leading figures of the American Revolution are naturally celebrated and remembered
They are indeed powerful and great portraits
He founded the Philadelphia Museum, later known as Peale’s American Museum which sadly later failed after his death. The collection all dispersed
Now we live in an age of Museums. Of all different sorts, types, collections, and the like
No longer are they “wonder rooms or cabinets of curiosities”. In the late 18th and early 19th centuries the museum came to be seen as an agent of Nationalism and the advancement of the State
The sociologist Tony Bennet in The Birth of the Museum (New York: Routledge Press, 1995), 6, 8, 24 wrote that the development of more modern 19th century museums was part of new strategies by Western governments to produce a citizenry that, rather than be directed by coercive or external forces, monitored and regulated its own conduct.
Peale`s vision however was a high vision. It was similar to that of Sir  Hans Sloane, whose collection was the foundation of The British Museum in London.
Sloane had a very clear idea that the purpose of his collections was to show the greater glory of God:

‘They [products of natural history] afford great Matter of Admiring the Power, Wisdom and Providence of Almighty God, in Creating, and Preserving the things he has created. There appears so much Contrivance, in the variety of Beings, preserv’d from the beginning of the World, that the more any Man searches, the more he will admire; and conclude them, very ignorant in the History of Nature, who say, they were the Productions of Chance.’

In his Will, Sloane was quite explicit:

“Whereas from my youth I have been a great observer and admirer of the wonderful power, wisdom and contrivance of the Almighty God, appearing in the works of his Creation; and have gathered together many things in my own travels or voyages, or had them from others …

Now desiring very much that these things tending many ways to the manifestation of the glory of God, the confutation of atheism and its consequences, the use and improvement of physic, and other arts and sciences, and benefit of mankind, may remain together and not be separated, … where they may by the great confluence of people be of most use.”