Decades after it was painted over twice, a Depression-era mural on the wall of the City Council chamber in Cedar Rapids’ City Hall has been restored to its former splendor. Scott Haskins, Chief Mural Conservator for Fine Arts Conservation Laboratories, and two assistants spent weeks removing five layers of paint covering the mural and retouching the damaged areas. The city worked repaired plaster on the walls, raised the ceiling height to ensure the entire mural would be visible and installed new lighting to showcase the historic art work. The total cost of the project was about $125,000 ($87,940 of that for the mural restoration alone) funded by the city and by matching funds from donors.

The newly restored mural is one of four painted in 1936 and 1937 by Harry Donald Jones and other Works Progress Administration (WPA) artists in what was then a federal courtroom. The murals were commissioned under the Treasury Relief Art Project (TRAP), a Treasury Department program that allocated funds from the WPA to decorate existing and new federal buildings. It allowed buildings that had no room in their budget for art to prettify their walls while at the same time giving work to unemployed but highly skilled artists. The vast majority of TRAP artists (90% at first, 75% later) were drawn from the relief rolls.

Harry Donald Jones was a midwestern native, born in Indiana and working in Iowa until he joined the Navy in 1941. He was the head of the WPA for the city of Des Moines and led several teams of artists commissioned to paint murals in Iowa public buildings. Jones and his colleagues were young visionaries who favored progressive political statements about the strength of workers, the progress of industry and agriculture, historical injustice towards Native Americans and other potentially touchy subjects. Once the 50s rolled around, those statements weren’t exactly popular. Only one of them managed to survive the decade without getting painted over: The Social History of Des Moines, a Jones fresco in the Des Moines Public Library. The library board had voted to paint it over, but wealthy local art patrons protested and saved the work. 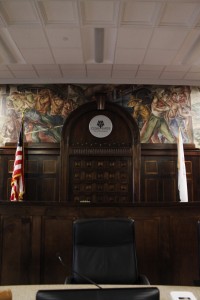 No patrons of the arts could intervene when the federal judge whose courtroom was decorated with the four murals, a cycle called Law and Culture, decided to get rid of them all. Apparently it was one particular image that caused the most trouble. The Evolution of Justice scene, part of the American Civilization mural on the east wall, depicted a man with a noose around his neck sitting on a horse. This image represented frontier justice while the rest of the mural welcomed the arrival of American judicial system. The soon-to-be-hanged man was on the wall right across from the jury box. In 1951, Judge Thomas Graven ordered them painted over because he was sick of hearing complaints about it and because, as he told the Gazette newspaper, it was giving him “moral turpitude.”

Ten years later someone chose moral turpitude over staring at a white wall, reportedly motivated by regret at the loss of the historic art works, and the overpaint was removed. Unfortunately the whitewash was stripped by city workers instead of art conservation specialists and the harsh cleansers damaged the original paint of the murals. They remained on view for three years until in 1964, Judge Edward McManus ordered the murals painted over again in response to yet more complaints.

This sad track record was put permanently in the past after the flood of 2008. The federal government gave the Beaux Arts building to the city of Cedar Rapids on the condition that all four murals in the cycle be restored and preserved. The first mural on the north wall was restored in 2011. Painted by Iowa native Francis Robert White, it’s called the Opening of the Midwest and depicts the suffering of Native Americans, the arrival of the settlers, the struggles of industrial workers and farmers.

It took some time to raise the money to work on the second mural, a piece called Inherited Culture by Harry Jones himself which depicts men unearthing artifacts from pre-Columbian civilizations ranging from Maya pyramids to the pottery and crafts of southwestern tribes. Watch restorer Scott Haskins reveal the murals underneath the layers in this neat video:

See the retouching and the restored mural in this video:

Cedar Rapids is now raising funds to do the same for the third mural, the American Civilization piece with the infamous frontier justice scene, hopefully by the end of the year. Meanwhile, the City Council chamber is open to visitors during the business day, so anyone can go and see the two murals that are already restored.

By: The History Blog
Via: Feedbin Starred Entries
Source: http://www.thehistoryblog.com/archives/26089