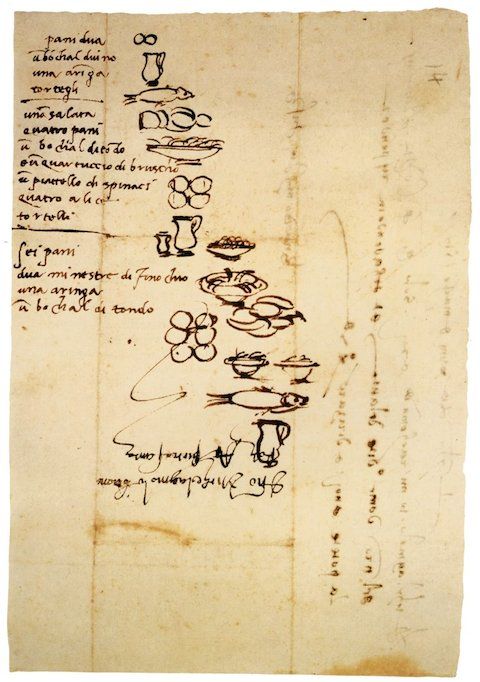 Sometimes people will say something like, “I could listen to Patrick Stewart read a phone book.” For you youngsters, a phone book was just a list of numbers, and the phrase means that a great talent can make even the most mundane activity a pleasurable experience. Open Culture posted a grocery list written by the artist Michelangelo in the 16th century. See, this household task was a necessary chore 500 years ago.

But when Michelangelo scrawled, he scrawled with both a craftsman’s practical precision and an artist’s evocative flair. “Because the servant he was sending to market was illiterate,” writes the Oregonian‘s Steve Duin in a review of a Seattle Art Museum show, “Michelangelo illustrated the shopping lists — a herring, tortelli, two fennel soups, four anchovies and ‘a small quarter of a rough wine’ — with rushed (and all the more exquisite for it) caricatures in pen and ink.” As we can see, the true Renaissance Man didn’t just pursue a variety of interests, but applied his mastery equally to tasks exceptional and mundane. Which, of course, renders the mundane exceptional.

-via Metafilter, where you can read a translation.