In 1983 I sat on the curb in Hannibal, Missouri and sketched the storefronts on Broadway. In the margins I wrote the following notes:

A mortician told us that the Schwartz Funeral Home caught fire. He said, “It really went. Biggest fire they had around in a long time. Luckily there was no stiffs inside. Old Schwartz don’t do much business.”

The owner of the TV repair shop came over. His name is Frank Brashears, and his shop used to be a confectionary. It once belonged to Molly Brown’s sister. Upstairs there used to be a bordello. Frank brought over the title and the deed, dated 1823.

Frank has a ham radio set. He recently spoke to Bombay, India. He showed us his postcard, with a picture of his radio equipment. It said “88s” which means Love and Kisses. All ham operators have postcards with their call letters. Frank wrote his: WØCJH.

We met a black artist named Larry Washington whose idols were Boris and Frazetta. He had a pencil drawing of a snake lady. He had a girlfriend who was pregnant. She saw her mother drive by, and her mother stopped and picked her up.

A hobo told us the clock over the P-D Sports Store is five minutes slow. 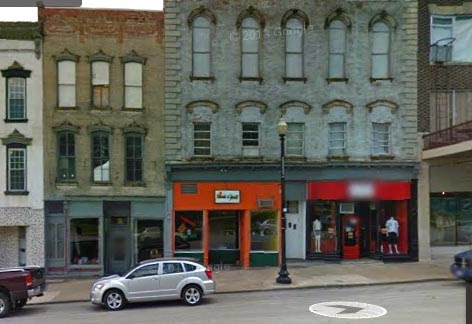 All the businesses have changed now, according to Google Street View. That page from my sketchbook is just a yellow leaf, drifting in the winds of time.