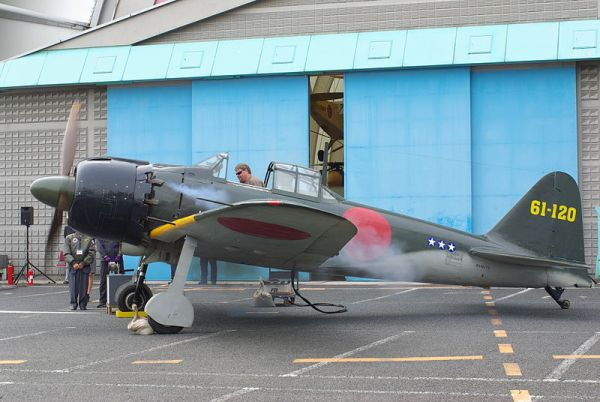 (Photo of a surviving Zero by PENTAX)

In 1943, 2d Lt. Owen J. Baggett of the US Army Air Force was deployed with the Tenth Air Force to India. At the time, Japan occupied Burma and threatened India. Lt. Baggett was the co-pilot of a B-24 bomber.

He was on a mission with the 7th Bomb Group to attack a Japanese position in Burma. His plane was heavily damaged by Japanese Mitsubishi A6M (“Zero”) fighters. Lt. Baggett and his crew bailed out.

The Japanese pilots swung around, intent on killing the aircrew slowly descending to the ground on parachutes. A 1996 issue of Air Force Magazine describes what happens next:

The Japanese pilots immediately began strafing the surviving crewmen, apparently killing some of them and grazing Lieutenant Baggett’s arm. The pilot who had hit Baggett circled to finish him off or perhaps only to get a better look at his victim. Baggett pretended to be dead, hoping the Zero pilot would not fire again. In any event, the pilot opened his canopy and approached within feet of Baggett’s chute, nose up and on the verge of a stall. Baggett, enraged by the strafing of his helpless crewmates, raised the .45 automatic concealed against his leg and fired four shots at the open cockpit. The Zero stalled and spun in.

Baggett made it to the ground safely, but was captured. He spent the next two years in a ghastly prisoner of war camp near Singapore. His captors had a measure of respect for him:

Shortly after he was imprisoned, Baggett, Jensen, and another officer were taken before a Japanese major general who was in charge of all POWs in the area and who subsequently was executed as a war criminal. Baggett appeared to be treated like a celebrity. He was offered the opportunity of and given instructions on how to do the “honorable thing”–commit hara-kiri–a proposal he declined.

The Japanese had found the body of the pilot that Baggett had killed. He was dead from a single gunshot wound to the head.

Baggett survived the horrors of Japanese captivity and returned to the United States. He later retired to San Antonio, Texas and lived to age of 85.