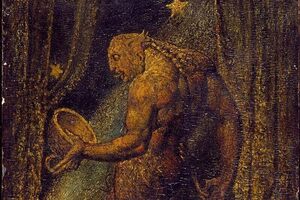 In the Tate Britain gallery hangs a small painting by the 18th-century artist William Blake, who claimed he was inspired to create this phantasmagoric gothic masterpiece after encountering a terrifying entity in a vision, which introduced itself as “The Ghost of a Flea.”

Blake claimed he was “visited” by this entity, which posed for him as he sketched it. He was able to “communicate” with the monstrous being, who revealed that all fleas were inhabited by the souls of men who were “by nature bloodthirsty to excess.”

It is a subject of scholarly debate whether Blake’s gothic visions were simply creative exercises of imagination whereby he was able to summon forth a sort of Jungian archetype to be captured artistically, or whether these were in fact hallucinations borne of a mental illness. Others have claimed less convincingly that the artist used psychedelic drugs or that the hallucinations were, in fact, real religious visions. Blake may have also been inspired after seeing images of fleas from the book Microphagia by the early English scientist Robert Hooke, who produced illustrations based on his pioneering documentation of organisms as seen through microscopes.

However, considering Blake’s strong political and religious/humanist beliefs, some art historians suggest there are other, equally compelling interpretations of this mysterious piece of artwork. Blake lived through a turbulent period of history marked with massive social upheaval, through the revolutionary wars in both North and South America, the Napoleonic Wars, the abolition of slavery, and the Industrial Revolution. It has therefore been argued that the apparition may actually be an esoteric metaphor for psychopathic leaders or figures of power that the artist believed needed to be restrained through human reason and political reform. Otherwise, their abuses of power could bring suffering, bloodshed, and death through war, persecution, or famine.

Today you can find this nightmarish and iconic painting in the Tate Britain gallery where it is well worth a visit if you enjoy gothic artworks or have an interest in the history of art.