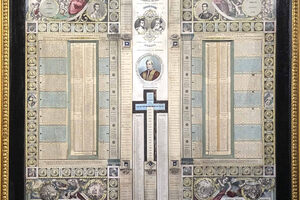 By the time world-famous Italian astronomer and mathematician Giovanni Antonio Amedeo Plana published his book theorizing the motions of the Moon on 1832, he had already begun constructing his Perpetual Calendar: an amazing mechanical device that allows anyone to easily discover details about any date between years 1 and 4000.

Plana’s Perpetual Calendar is discreetly hanging on the sacristy of the small Chapel of Merchants and Bankers in Turin, Italy. It operates by turning a wooden handle below the calendar’s adorned golden frame.

Inside, vintage machinery cranks into motion: nine carefully inscribed cylinders begin to roll simultaneously via gears and toothed chains. Tiny windows within the elaborate display transmit information about the phases of the Moon, solar cycles, tides, moveable Catholic holidays (such as Easter or Carnival), and also the day of the week for any given date across 40 centuries. It accounts for the shift from the Julian to Gregorian calendar, leap years, and more.

The Chapel of Merchants and Bankers is a little baroque jewel hidden in the heart of Turin. It was built in 1663 and is considered a monument of national significance, even though few outside of the congregation know it is there.