This is one of the many small articles that appear in major sci/tech/engineering journals in the 19th century that are absolutely so filled with human spirit that it fills your heart with hope for humanity (even if everyone involved has been dead for at least 125 years.  This one is a ravishingly simple three-page report on how to move a (substantial) brick house with a few guys and a horse. The title of this post is taken from the report1, where (I feel) the writer just took a step back from his work and said “holy ____!”, and admired the sheer beauty of the simple and successful approach to a major task. And as it turned out, the house was all of 1/4″ from where it should have been, and that was quickly rectified with a screw jack.

And about that lifting-of-the-house business–the main part of the job was done by one man and five screws, and as the writer observes with another fantastic-quote moment, “The screw jacks were set by one man alone, to ensure the equality of strain”! I know it is a technical expression, but “ensur(ing) the equality of strain” sounds very applicable to a lot of things, the equivalent of a bean thread base to a veggie stir fry.

Here’s the article in case you need to move a brick house: 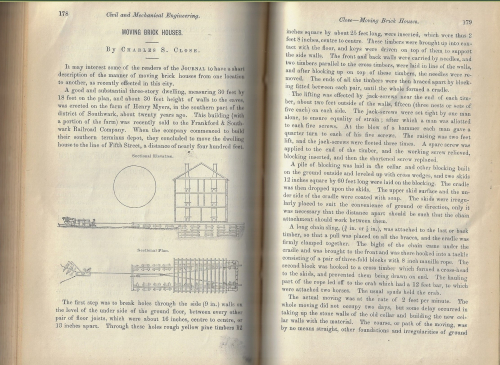 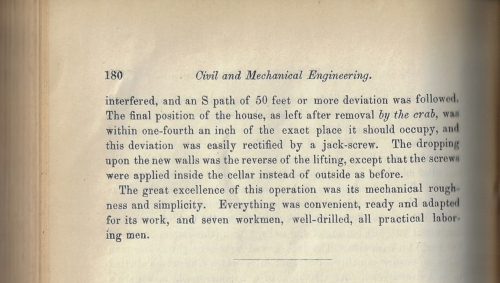