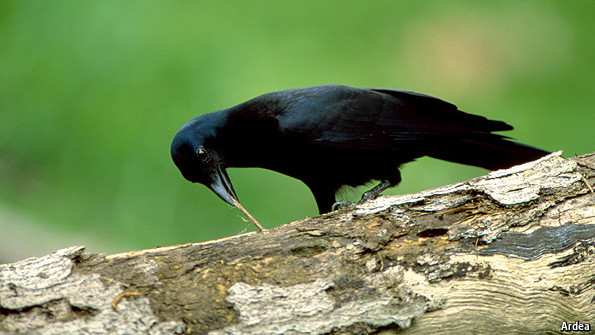 FROM ancient cave art in France to Van Gogh’s last painting, members of the crow family, or corvids, have inspired mythology and literature implying their intelligence to be superior to that of other animals.
Indeed, corvids are cleverer than most birds, and are known to perform feats that can stump even primates and small children. Wild hooded crows in Israel, for instance, catch fish by dropping bread crumbs as bait. New Caledonian crows in New Zealand fashion hooks from twigs to capture food.
While much existing research has focused on showing that these avian Einsteins use creative methods to solve complex tasks, surprisingly little is known about the limits to which their tiny brains can be pushed. But in a new study, published recently in PLOS ONE, Sarah Jelbert and her colleagues at the University of Auckland conducted a series of experiments on New Caledonian crows to explore just this.
By recreating the setting from Aesop’s Fable “The crow and the pitcher”, the researchers have…Continue reading END_OF_DOCUMENT_TOKEN_TO_BE_REPLACED 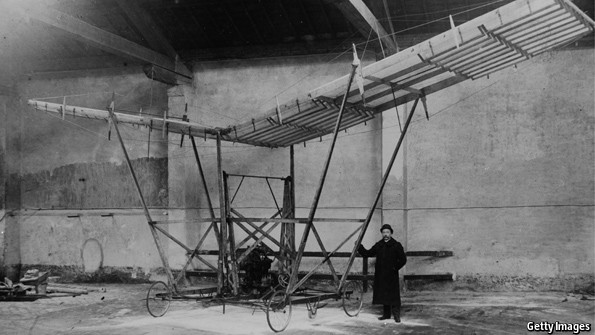 ENGINEERS often look to the natural world for inspiration—and flight engineers, doubly so. Mankind’s desire to soar like the birds directly inspired the Wright brothers’ solution to the problem of controlling a heavier-than-air flying machine, by suggesting the way to do so was to warp the shape of the craft’s wings. More recently, designers of ornithopers (tiny, robot flying machines lifted by flapping wings) have looked to insects for inspiration, and built systems of sensory feedback that can keep aloft designs which are essentially unstable.

It would be better, though, if those designs were not unstable in the first place, so that any on-board electronics (all of which contribute to a craft’s weight) could concentrate on the more useful task of piloting the thing to its destination, rather than merely keeping it in the air. And that, by looking at a rather different natural model, is what Leif Ristroph and Stephen Childress of New York University think they have done.

Their ornithopter, described in this week’s Journal of the Royal Society Interface, resembles not an insect, but a jellyfish. As Dr Ristroph and Dr…Continue reading