What attracts me to this scene in Kingston, New York is the cluster of poles and wires next to the sign, and the delicate details of the far distance. 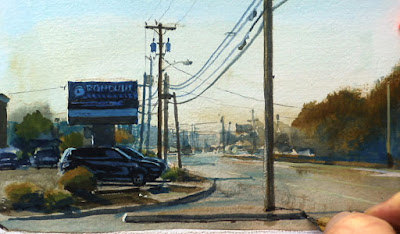 Transparent watercolor is fast and direct. I also like watercolor because it makes gradations easier, and the accidental variations and textures seem to work in my favor for this scene.

I limit the colors to a blue / brown gamut, disregarding greens and reds. I want to keep the lights light and the darks dark like a high contrast photo.

(Link to video on Facebook) This video takes you through the process. Note that I first wet the surface with clear water before applying the ghost wash. There are a few white gouache touches at the end.

On Facebook, Linda Navroth asks: “It’s cool to watch you use gouache like oils – building up layers. How do you choose your scene? Sometimes at first they look quite unremarkable, but by the time you’re done, it’s always something special. Do you sense that quality when you start or is it imbued with some sort of “Gurney Magic” during the process?”
The first requirement was shade, because it was so hot. Second was the contre-jour angle toward the light. Beyond that I felt the view had minimal prospects. And I had very low expectations about my painting from the beginning to the end of the process.

There’s no Gurney Magic, but there is a procedure that I trust. To paraphrase photographer “William Eggleston when asked why he photographs mundane things, I would say ‘I paint things to see what they look like painted.’ Route 9W seems to be my Briar Patch, my Kuerner’s Farm. That unloved stretch of highway always attracts me. I know that artistic gems are hidden there that I have a chance of finding if I just set up and start painting, with the meter of my mind tuned midway between doubt and confidence.

END_OF_DOCUMENT_TOKEN_TO_BE_REPLACED

Several well known folklore paintings from Russia’s classic age of imaginative realism are on show in London at the Mall Galleries. Sadko is a hero from a medieval epic. Musician, gambler, and adventurer, he traveled to the sea floor where the “Sea Tsar” or king of the mermen provided him with his choice of a bride.

According to a press release, these paintings were acquired by Art Russe from a noble family.

EDIT. The Sadko painting and perhaps some of the other ones in the London show may be copies, done either by Repin or another artist. The original of Sadko is on view right now in Holland (Link for more info). Thanks, Damian and Annelotte.

END_OF_DOCUMENT_TOKEN_TO_BE_REPLACED
Yesterday while Jeanette was at the supermarket, I stood on the hill across from the discount tire place and imagined the world in different light.
The line written on the sketchbook page says: “They told us to meet the ship at midnight at the tire place.”

This short video documents the painting process, but also sets up the mood and story a little more. If you’re receiving this by email, you might need to follow this link to watch the video on Facebook.
—–

Fidelia Bridges (1834-1923) was one of the few commercially successful female artists of the late 19th and early 20th centuries. She was a student of William Trost Richards, who encouraged her to paint detailed views of nature. Her sensibilities resonated with the newly emerging technology of color printing, called chromolithography, published in the form of album cards and greeting cards by Louis Prang.
Album cards were treasured color images intended to be glued into a scrap book. Bridges was influenced by Pre-Raphaelite art and Japanese prints. Often the scenes included a foreground bush or tree with a couple of birds, with a landscape view visible beyond. These prints were immensely popular, and made her famous and well compensated, though some people in the day complained of the prints being overly saturated with color. There’s a chapter on chromolithography and the art of the late 19th century in the book The Artist’s Garden: American Impressionism and the Garden Movement

END_OF_DOCUMENT_TOKEN_TO_BE_REPLACED
In his 1914 biography, Frederic Cooper describes Portrait of a Sergeant by Jean-Louis Meissonier (1815-1891).

“What a magnificent collection of different degrees of attention: that of the portrait painter as he studies his model standing in front of him on the pavement, in his finest uniform and his finest pose,”

“that of the model intent only upon doing nothing to disturb his ultra-martial bearing, his gaze menacing, staring, fixed… “…that of the spectators, some of them drawing near, fascinated, another who casts an amused glance at the picture as he passes by, with some sarcastic remark on his lips; another who no doubt has just been looking, and for the moment, with pipe between his teeth, is thinking of something else as he sits on a bench with his back to the wall and his legs extended in front of him.” “Meissonier rediscovered the decent folk of that period, which was not made up exclusively of mighty lords and fallen women, and of which we get, through Chardin, a glimpse on its honest, settled bourgeois side.”

“Meissonier introduces us into modest interiors, with woodwork of sober gray, furniture without gilding, the homes of worthy folk, simple and substantial, who read and smoke and work, look over prints and etchings, or copy them, or chat sociably, with elbows on table, separated only by a bottle brought out from behind the faggots.”
—-
Jean-Louis Meissonier, 1914, free online book by Frederic Cooper
Jean-Louis Meissonier on Wikipedia
Portrait of the Sergeant on Wikipedia Commons

END_OF_DOCUMENT_TOKEN_TO_BE_REPLACED

In this TED talk, news illustrator Richard Johnson tells what it was like to sketch during the wars in Iraq and Afghanistan and how sketching brought him closer to the military company he traveled with.

He shares how the combat and courtroom artist Howard Brodie (1915-2010) inspired him early on, and he discusses what art can capture that photos can’t. (Link to YouTube)
—-
Interview with Richard Johnson on WBUR radio In 1915, photographer Léon Gimpel befriended a group of kids playing make-believe war games on the streets of Paris, and had them stage tableaus for his new-fangled autochrome camera.
—
Read more in The Guardian

introduced the 25-year-old Andrew Wyeth as “One of America’s Youngest and Most Talented Painters.” The article describes his painting methods, providing a valuable document, because Wyeth was mysterious about his technique in later years. Here is an excerpt:

Watercolor technique
“He works on a medium rough watercolor paper which he has made up in blocks (22×30 in). He objects to stretched paper, says he believes it loses its capacity for brilliant effects. All his painting is done with three sable brushes, Nos. 5, 10 and 15. The never uses those broad flat brushes so many artists employ for large, covering washes.

END_OF_DOCUMENT_TOKEN_TO_BE_REPLACED

Pixar has released a free online course to explain the science and technology behind its approach to making computer-generated animated films. The interactive course covers most of the math-based aspects of the production pipeline, such as character modeling, environment modeling, combinatorics, animation physics, and surface rendering.

Here’s the intro video (link to YouTube), which amusingly shows a lot of handmade skills (such as sculpting clay and drawing with markers—and relatively primitive technology, such as an Ektagraphic slide projector.

This video, for example, takes a look at the lighting factors and surface qualities that contribute to the color of an object. (Link to YouTube) The presentation seems intended for school-age learners rather than fellow professionals or mega-geeks. Each segment is presented by someone from the department in question. Missing from the presentation is the softer science of Pixar’s process, such as how they approach story development, character design, and acting for animation. I hope they include those topics in future teaching modules.

Pixar in a Box
Via Design Taxi

END_OF_DOCUMENT_TOKEN_TO_BE_REPLACED

One of the masters of gouache painting was the French academician Jehan Georges Vibert (1840-1902). All the paintings in this post are in watercolor / gouache.

Vibert had a special gift for storytelling. Here he interprets the classic folktale of the wanton “grasshopper” falling on hard times and asking for a handout from the industrious “ant.” Notice the heavily laden pack animals, the broken shoe of the troubadour, and the dismissive gesture of the monk.

Roofers pause from their work to peep inside a building. The figures are carefully studied from models who were probably real roofers.